You can switch to your country or region site to browse and shop online.

My Life in Movies: “Ice Age: Dawn of the Dinosaurs”

Jayme Wilkinson joined us for Lightbox Expo 2021 to take us behind the scenes of “Ice Age: Dawn of the Dinosaurs” to show us the character development of Scratte, T-Rex Mom, and Buck, animating the characters, and building a new world for them to interact in. 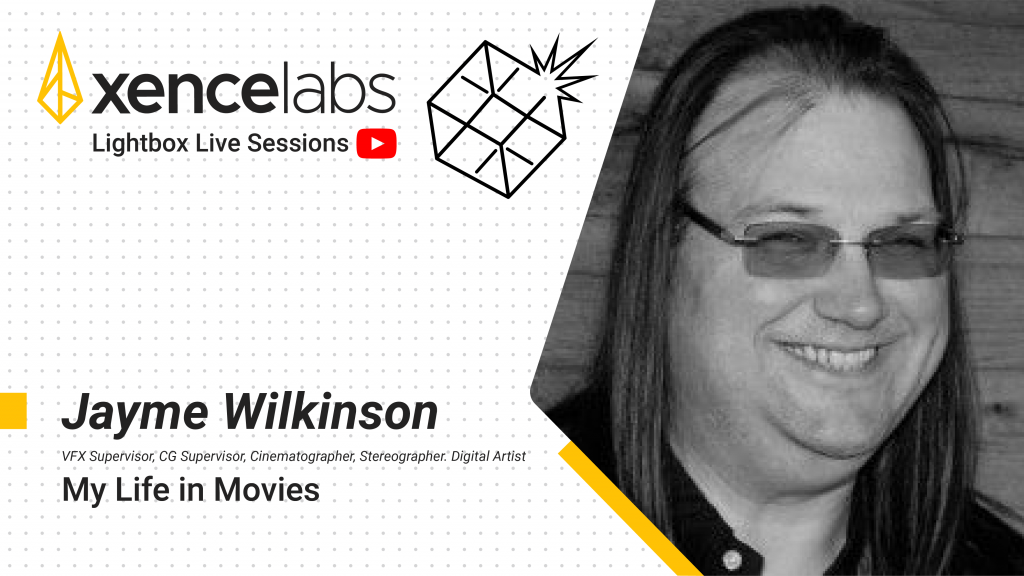 Jayme Wilkinson studied fine art at The Cleveland Institute of Art, Computer Science at The University of Akron, and Cinematography at Ohio State University. He started his journey working at various post-production companies and doing illustration for children’s books and publications, He designed Portable Computer equipment and then used and helped studios implement Maya® from its early stages. From there, Jayme spent time at Walt Disney Animation Studios as CG Supervisor on “Lilo and Stich”, “Brother Bear”, and “My Peoples” feature animation projects. He worked for Electronic Arts – Tiburon as CG Supervisor, on the “NASCAR 2005”, “NASCAR 2006”, “Madden 2006”, and “Superman Returns” video game titles.

These days he can be found in New York working with Blue Sky Studios, a division of Twentieth Century Fox. working as Technical Supervisor on their Feature Animation projects “Ice Age : The Meltdown”,  “Dr. Seuss’ Horton Hears A Who”, “Ice Age 3”, “Epic, and “Rio 2”. 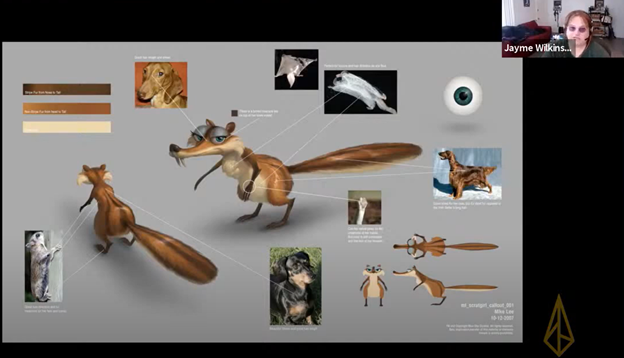 Blue Sky Studios took the original concept drawings and converted them to 3D sculpts in order to build the characters. Jayme explains that “This 3D model is scanned through multiple mediums and is used to compare against what the modelers actually generate.” The modelers can then rotate the 3D version and alter the sculpt to have longer eyelashes or other key components that might not have been as visible in the original 2D concepts.

Once the team has an idea of all the nuances for the character’s look, they break down the characters’ movements to make sure that the character rigs the right way. The rigging department puts the skeleton, deformers, and controllers into the model so the animators can accurately animate the character. To see the beginning stages of developing Scratte for “Ice Age: Dawn of the Dinosaurs”, the female counterpart to the squirrel who always lost its acorn, join us at minute 4:53. 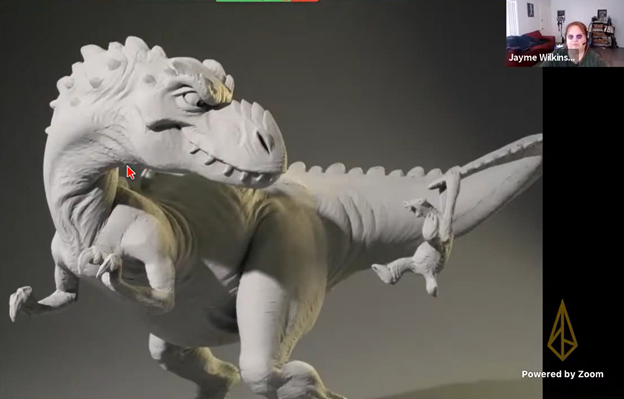 The character development for T-Rex Mom went a little differently than for Scratte. Jayme explains that they start out with sketches just like usual; but, since she interacts with Syd, they had to do studies relating the size of the two characters. “Another major benefit of doing the maquettes – especially in an animated feature – is that you can see how the shadows fall on the muscles of the character,” Jayme says as he filters through images of the T-Rex Mom’s early sculpted version. To walk through this character’s creation with Jayme, join the Lightbox Live Session at minute 11:47. 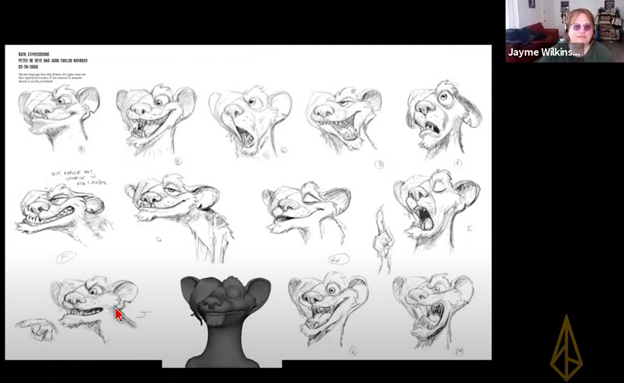 Buck’s character went through many changes as they developed him. Some of the concepts evolved from famous action scenes of Chuck Norris and Rambo. Jayme describes the challenges of perfecting characters throughout the development phase: “We had proportion problems with Buck because we didn’t want him to look too long or too tall, but he also needed to be long enough to do all his weird movements.” The art department and directors make notes to slim down, puff up, and perfect each distinct feature of their characters to get them just right before they start animating them. To see how they designed Buck’s character, start the Lightbox Live Session at minute 20:09. 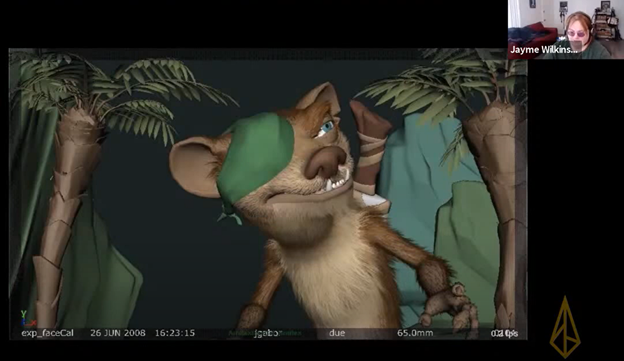 As the characters are developed, the production team starts animation blocking which is essentially just roughly animating the characters. This step makes sure the camera angles are right and that all the environment’s elements are in the right place. To watch how they constructed the animation throughout the making of “Ice Age: Dawn of the Dinosaurs”, start this Lightbox Live Session at minute 32:09. 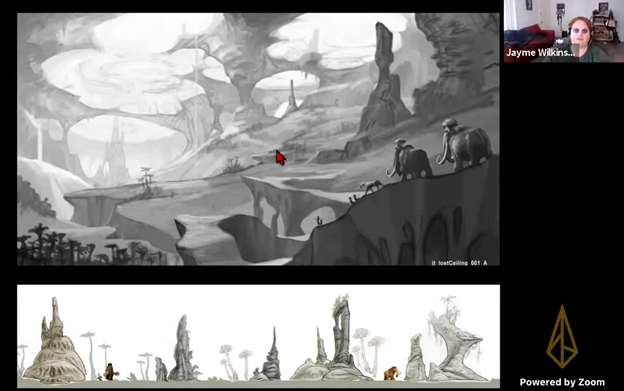 Lastly, Jayme takes us back in time into the land of dinosaurs, as seen in “Ice Age: Dawn of the Dinosaurs”. The art department starts with sketches, then color, then layouts and, once everything is approved, the 3D modelers model the environment into the points they need for certain camera angles. Just like with the T-Rex Mom, size and proportion plays a big role in this stage of production. “You have to determine the proportion of character to the environment to make sure that it fits,” explains Jayme. He walks us through all the art studies in these characters’ new world, so be sure to tune in at minute 43:08 to get in on the fun.

Q: Did you lay over textures as well or is that another team?
A: The art department does “draw-overs” to put a sample texture on the character before the modelers take over and actually puts the 3D texture in place. There’s not much texture painting. Many of the characters’ features are made with procedurally generated textures.

Q: Which character did you enjoy working on most?

A: When I was working at Disney, we did a feature called “My Peoples” and there was a character not in the reel called Crazy Ray. He was a lot of fun to work on.

Q: How long did it take to settle on Buck’s character?
A: Months. It was definitely one of the longer ones and the entire production process was about 18 months.

Q: Do you find yourself developing many in-house tools for rendering etc

A: Yes. Even for animation, but it depends on the project I’m working on. I’ve had to develop and work with custom particle systems because of requirements for production. Sometimes it’s crow systems to let the directors and animators choreograph dance routines.

Q: How do you develop what trees you use?
A: That’s up to the art director and it’s just an artistic choice.