You can switch to your country or region site to browse and shop online.

Halloween Inspiration in Comics & Truth in Self Expression via Art

Join Jo Gray, Art Director at New Technology Group for The Walt Disney Company, as she dives into her comic book world, Little Bernice, where every day is Halloween.

“It’s important to keep your mind open to learning”

Jo Gray is a multimedia designer and technologist for Walt Disney Parks and Resorts. To say Jo does a little of everything is a bit of an understatement. For Walt Disney Parks and Resorts, she creates prototypes, does animation, presentations and sometimes websites and murals for cast environments. At work and with her home art, she uses After Effects, Photoshop, Illustrator, Premiere Pro, and even some Maya and 3D animation. Her love for creative arts started when she was a little girl. She went on to get a Bachelor of Fine Arts from Michigan State University in Graphic Design as well as a Master of Fine Arts from RIT in Computer Graphics and Animation. 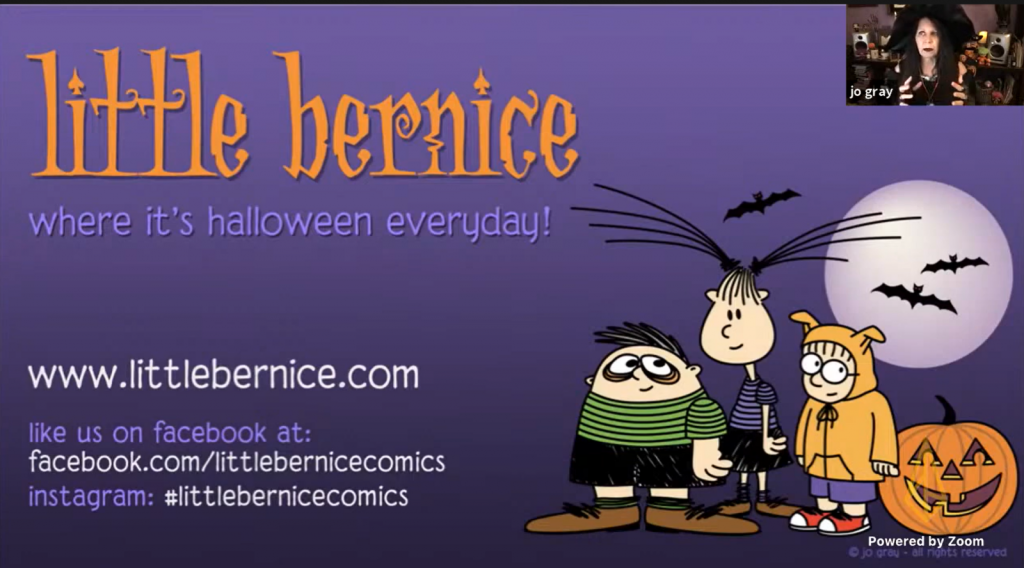 Little Bernice is a comic strip about a brother and sister, Hamilton and Bernice, who want to make every day Halloween. A ceramic figurine of a “demon guardian from Hell” at the Apple Pumpkin Festival Jo Gray and her husband attended years ago inspired the creation of Little Bernice’s character, Hamilton. She pondered over the ham-shaped Hamilton character for a while until she came up with his sister, Bernice. “Bernice is kind of me because I needed a voice, too,” Jo reminisces, but postulates that both Bernice and Hamilton share a bit of Jo’s inner voice. “People can be themselves or something they’re not normally on Halloween,” Jo smiles as she’s dressed in full witchy garb. Many artists depict themselves within their work, so it’s fun to see a little of Jo’s alter ego play out in her comics. 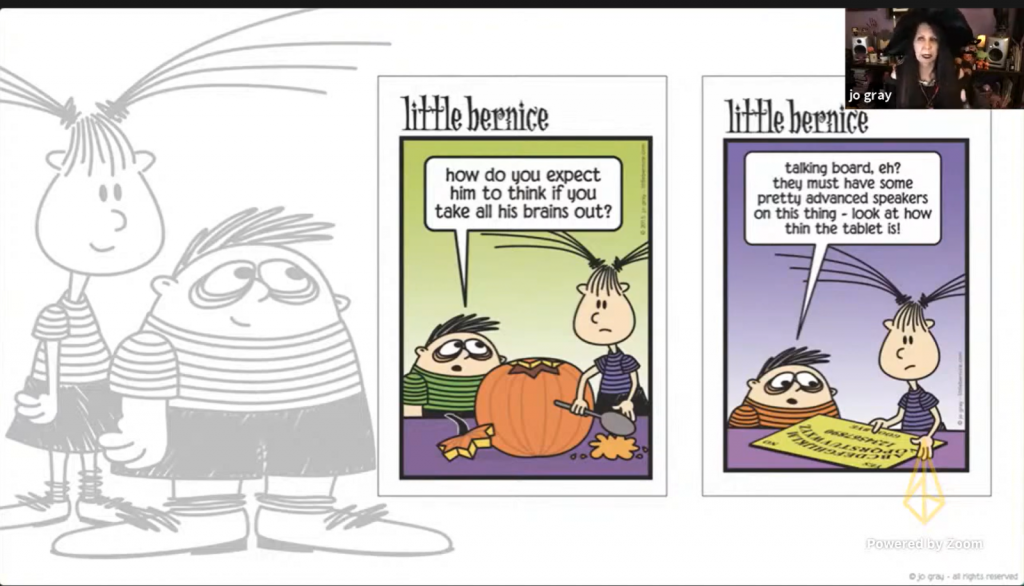 Her initial concepts were drawn with pen and paper as scribbles here and there.

Wanting to make things look perfect from the get-go, Jo quickly started doing her designs in Illustrator. In Illustrator, she could create a library of faces, hands, and expressions to put them together and write a story. She thinks about how an obscure topic might relate to Halloween, figures out what the characters might say, and then creates four panels of art with the characters. From there, she can cut and paste the characters in Illustrator and edit the faces and poses to match her scene. 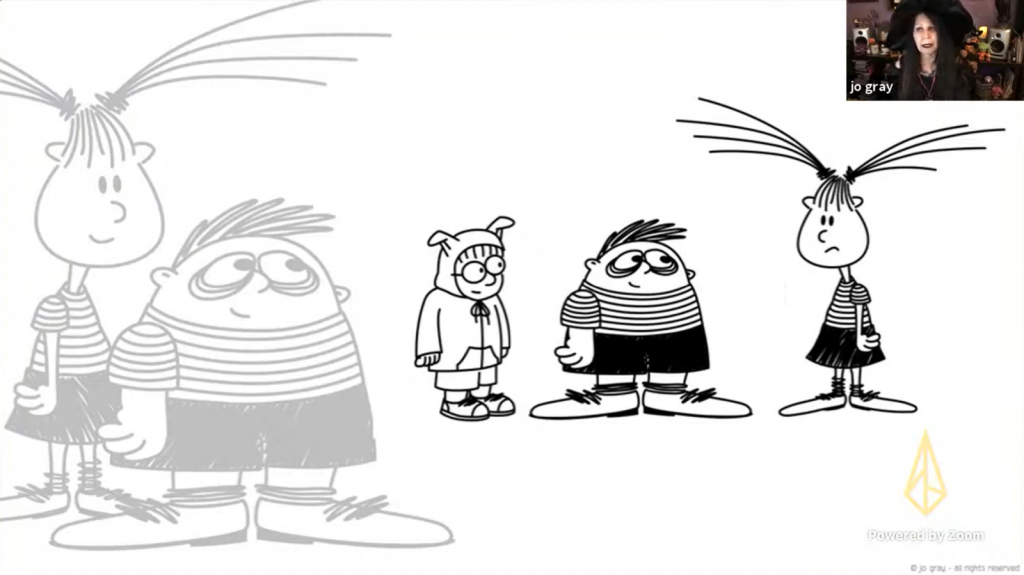 She used point-to-point drawing in Illustrator or sketched on paper until she found Xencelabs. “When I discovered this tablet, I realized I could use the brush tool and get my points at the same time,” Jo explains as she shows us one of her newest characters created with the Xencelabs Pen Tablet, a new black cat character. For Jo, she was able to get sketches and concepts done more efficiently when using the Pen Tablet versus just pen and paper. “I could get a whole bunch of ideas down right away just as if I was using a piece of paper and a pencil except this time I can go in and mess with the points to move it this way or that,” says Jo. It also helps with smaller details like the feet so she doesn’t have to drag minute point-to-point drawings in her sketches. 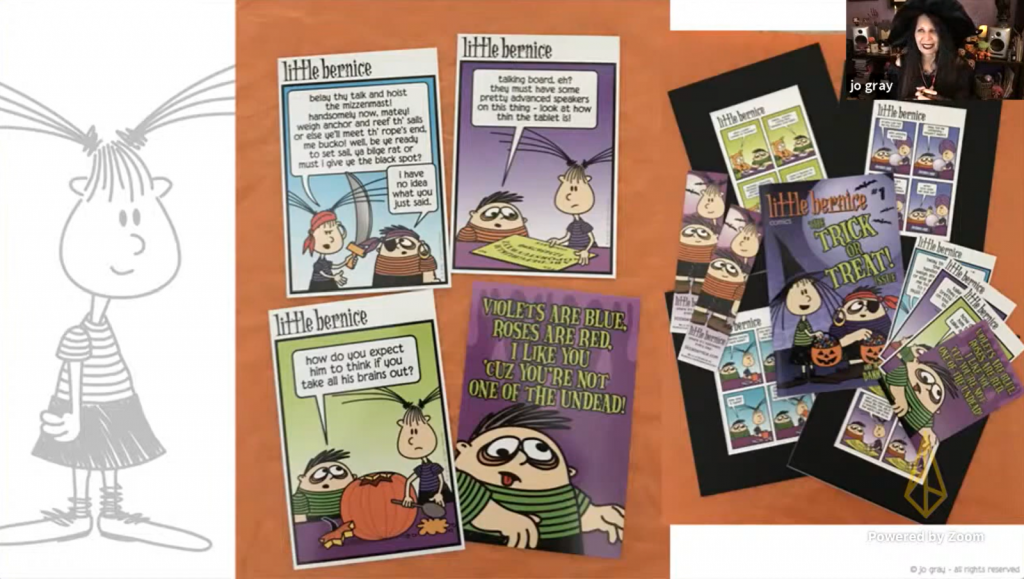 She went to Halloween trade shows with her comics, postcards, and framed art to connect with the Halloween-loving community.

Jo’s approach to getting her comic out in the world may seem old-fashioned, but it works! She went to Halloween trade shows with her comics, postcards, and framed art to connect with the Halloween-loving community. Even today, artists go to virtual trade shows like Lightbox Expo to feature their work. Jo’s advice for future comic illustrators is “If you’re gonna go into comics, [tradeshows] are great to get a following but people really want to take home a book.” So, with the help of Ka-Blam Printing, Jo created a 32 page comic book to showcase Bernice and Hamilton’s Halloween world and she has a second book in the works!

If you want to get in the Halloween spirit every day, check out the full Xencelabs x Jo Gray Lightbox Live Session on YouTube.